Before any other news of the last two days . . .

. . . three cheers for our tour photographer Laurie Harbeson, now lugging the gear on her 3rd KSB Concert Tour. We are all so lucky to have Laurie's talent capturing all the color of India and of your boys. There are many more pictures than the ones on the blog, and there will be a way to access these when we return. Laurie and I have also talked about making a photo book of the tour, available for purchase later this winter if there's interest. Details later this month.


Just like every other tour, we've hit a patch of poor health,

. . . with some coming down with colds, and a few with stomach troubles, but thanks to the good care of our medical team, and especially Julia Rasch, everyone is on the mend. Fingers crossed, that was the worst of it!

Our typical routine continues to be  . . .

. . .   a staggered wakeup, morning showers, breakfast, and sectional rehearsals until everyone is in the basement rec room, which we have taken over. On the Thursday's agenda, the Delhi Commonwealth Women's Association (DCWA) Children's Hospital and clinic for a concert, and then on to Gandhi Smriti, the site where Ganshi's assassination, where we will be reunited with Arun Gandhi, and his son, Tushar.

Before we boarded the buses for DCWA, we walked to the market behind the Hostel to pick up a snack. On the way there - a snake charmer! Yeah, a tourist trap, but still really cool! 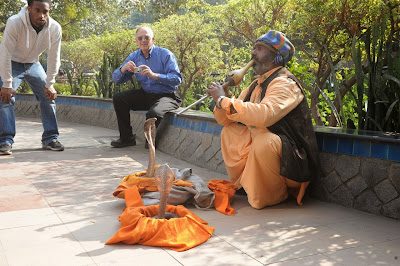 At the market, children show up as soon as we do using one English word they know pretty well - money. This little girl could not be more than five or six, and is carrying her little sister, perhaps a 1 year old. Between food and rupees, these kids had a good day, despite a range of feelings about how to respond. Prayer of the Children takes on a new meaning. 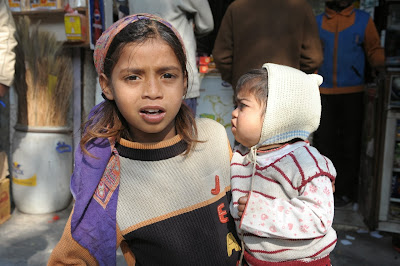 Founded to foster cultural exchange for women of the Commonwealth, DCWA's purpose is now to provide social services the underserved in Delhi. It was a good day to visit a children's hospital and for our medical staff to be able to consult with theirs! 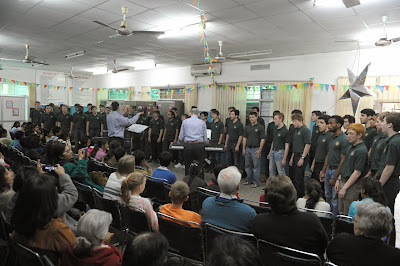 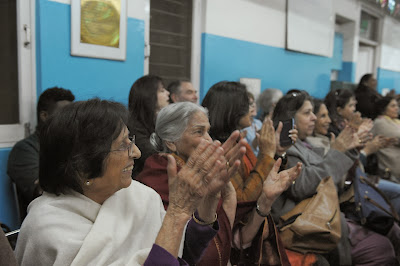 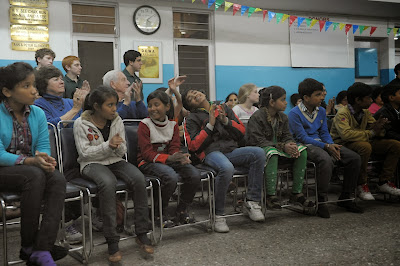 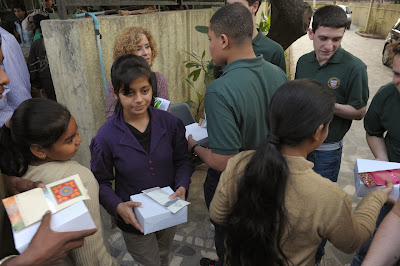 The children in the audience presented us with a snack and a gift and handmade cards. 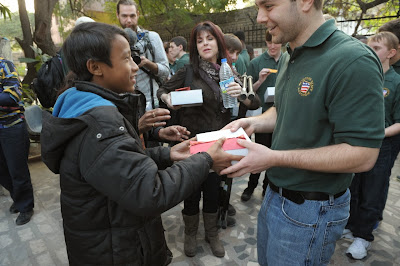 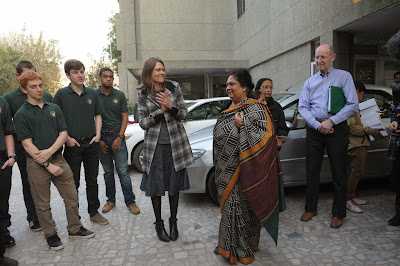 In the audience at the concert was the Chair of DCWA, Mrs. Kumar and Mrs. Dalder, wife of the Australian Ambassador to India (a nice connection to have made for this summer's tour!) 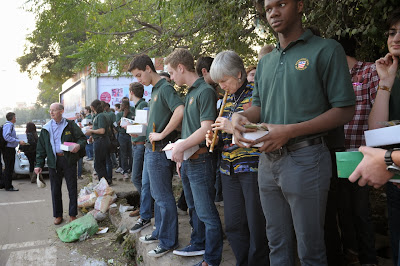 For the last 144 days of his life, Mahatma Gandhi lived at Birla House, and was assassinated there at 5:17pm on January 30, 1948. The house is now known as Gandhi Smriti (Gandhi Remembrance).

Footsteps mark the path that Gandhi took to afternoon prayers, and a shrine marks the spot where he fell. 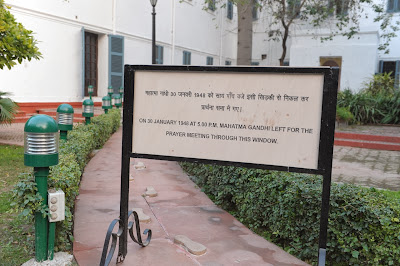 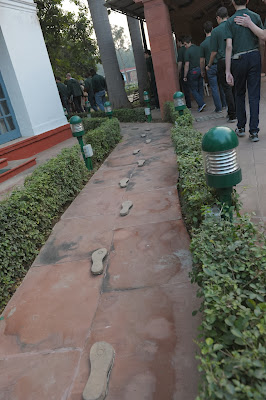 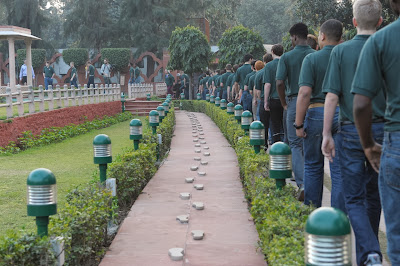 Lead, kindly Light, amid th’encircling gloom, lead Thou me on!
The night is dark, and I am far from home; lead Thou me on!
Keep Thou my feet; I do not ask to see
The distant scene; one step enough for me. 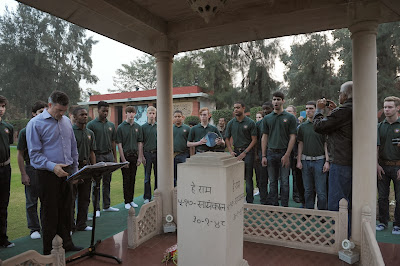 Arun and Tushar Gandhi joined us, and spoke of Gandhi's final fast, held until the violent conflict between Muslim and Hindu factions in the early days of Indian Independence was resolved.

To honor Gandhi at this spot, the boys sang Zikr, an Islamic Chant, and Ramkali, based on a Hindu raga. 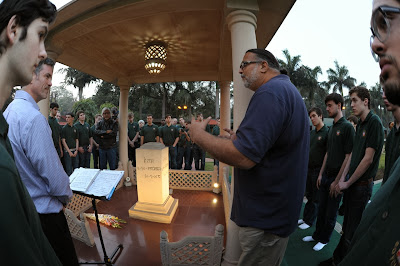 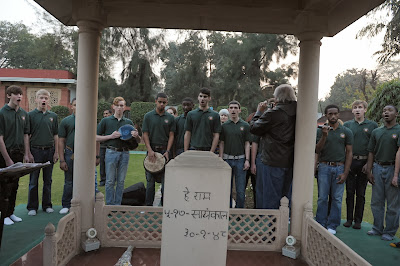 After each song, not applause, but not silence either . . . the song of the birds flying overhead, as the birds themselves honored the moment. The mood was at first somber, but transformed to surprisingly joyful, and I think that this is the meaning the boys take away from literally walking in Gandhi's footstep. Of course there's the tragedy of his assassination, but there is the legacy of his life, of his commitment to nonviolence, to his commitment to the idea that there are no enemies, which the boys embodied as they sang Zikr and Ramkali.  In my almost 13 years with KSB there are a tiny few moments where the mission of the choir is so perfectly fulfilled: superlative music making, life changing experiences, history come to life, the true presence of brotherhood beyond that of the choirboys.

Ending with Prayer of the Children and Tour Hymn, the Grads took in the images and words of Gandhi's life displayed at the site, and we were fortunate that though the museum was closed, Arun and Tushar made it possible for us get in anyway and to see the room where Gandhi lived his final days. 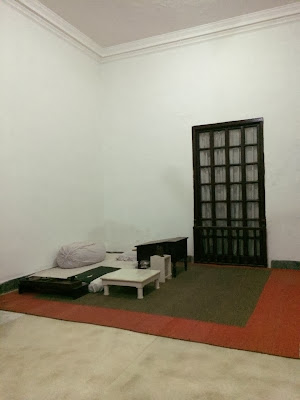 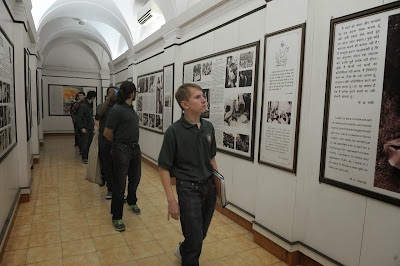 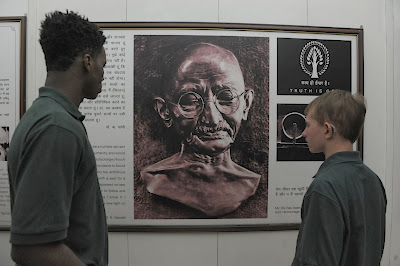 Back on the buses, the dinner plan was to return to the mall where we performed earlier in the week.

Just when we were about to arrive at the mall, we get a message from our contact at the US Embassy, Jennifer Mauldin, whom we had run into at Neemrana the day before, inviting all 68 of us to the restaurant at the US Embassy for Hamburgers, Hot Dogs, Macaroni and Cheese!

Even though the embassy is over an hour from where we were when we got the message, no one minded. Might have something to do with the fact that several teenaged daughters of the foreign service staff who live on the grounds of the embassy compound got word of 50 American boys in the house. Though we are enjoying Indian food, the boys are always happy for a little taste of home! 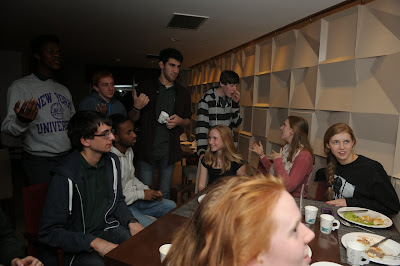 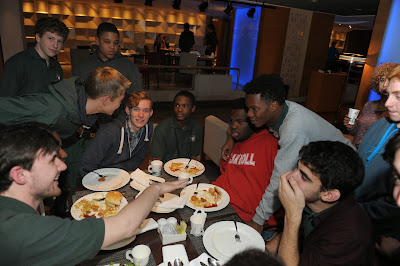 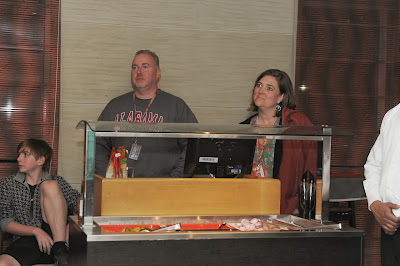 Our hosts, Jimmy and Jennifer Mauldin, who have lived all over the world, raising their family at postings at various embassies.

With the current tension between the Indian and American Governments,  Jimmy was emphatic in thanking the boys for representing the US so well  in India on this tour. He also encouraged the boys to consider careers in the foreign service, and I will have to warn you that at that moment several guys looked at me and pointed at themselves! 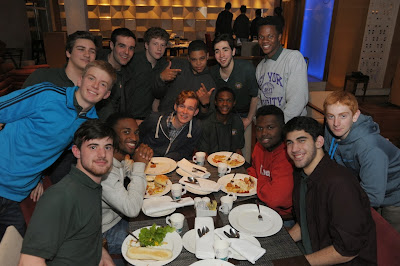