Last day in London - off to India!

Back at Heathrow waiting for our gate to be announced. For the most part, the boys slept in today, though I hear that at least one group got to go back into London. You may get a peek at their purchases on a later blog with pictures. They were very excited about what they found. ;-)

Today's concert was in a small church in the town where we have all been staying, with an enthusiastic audience of parishioners, homestay hosts, friends and relatives of our group who live in London who were so excited to have a chance to see the boys perform. We even had an audience member who had been a member of Kings' College Choir back in the 1950's. The boys were quite happy to be performing for a real audience for the first time on this trip, and did not fail to please!

They've just announced our gate, and we've just learned that it's a 20 minute walk from the waiting are where we are gathered, so I guess that's it for now!

Looking forward to catching up with Mr. Fisher in Delhi, and to see what India has in store for us!

All are still as healthy and happy as they were yesterday,

Just one photo from my phone from Whistle, Maggie, Whistle. 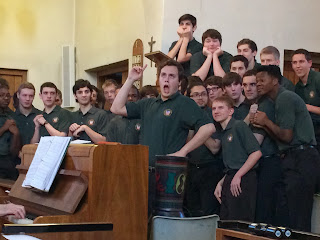